On the basis of a 125cc scooter engine, we want to demonstrate the potential of the ALP –supercharger technology in this small but extremely popular vehicle class. Our objectives are:

With regard to a suitable test engine, we chose the modern, air-cooled, four-stroke scooter engine “125-iget” with three valves from PIAGGIO. The reasons for this were:

For all executed tests the engine kept mechanically completely unmodified. Ingnition and injection timing had been adjusted for the ALP ECU-mapping.

By means of the ALP supercharger the torque should be increased especially in the midrange of engine speed in order to obtain a powerful engine characteristic, which is of great importance for the driving performance in this (small) displacement vehicle class. The maximum speed of the engine remained unmodified in terms of its design for a long life time. The subsequent performance diagram shows the success of the ALP supercharging with up to 30% torque and approx. 20% increase in power. Although the focus of the ALP layout was concentrated on the performance optimization, the full load enrichment was already “reduced” to AFR≈14,0 compared with AFR≈12,5 of the factory mapping. The background of the technical possibility realizing a stoichiometric running engine respectively avoiding the full-load enrichment is explained in the following chapter “Reduction of fuel consumption”. 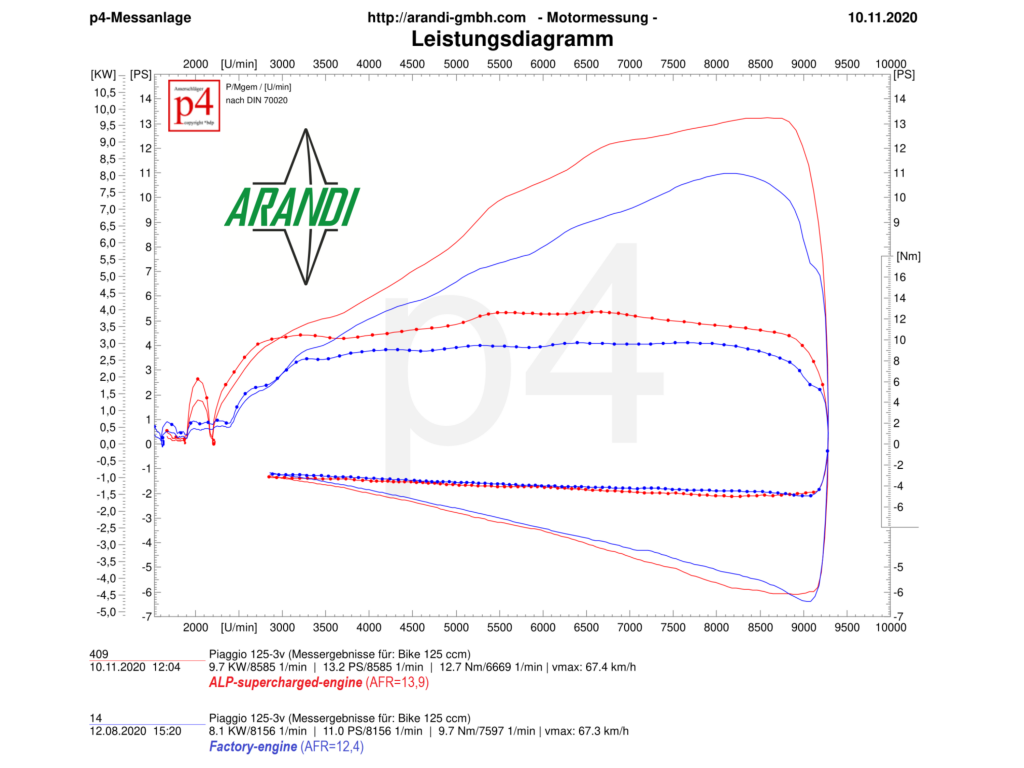 In order to reduce the specific fuel consumption significantly, the full load enrichment has to be eliminated and the engine should operated at higher load (dethrottling). The latter step is achievable by increasing the torque in combination with a reduction of speed (longer final drive). The waiver of full load enrichment is only possible up to a maximum (average) exhaust gas temperature as a decisive criterion for the thermal stress of the cylinder head. If this temperature is exceeded, additional fuel for internal cooling must be added to protect the engine components. Depending on the engine type, the AFR is usually in the range of AFR≈11,7-13,2 at full load, i.e. 10-20% unburned fuel in the exhaust and corresponding high CO-emissions !

Due to the increased fresh air charging pressure ALP supercharging now enables the cylinder head to be efficiently scavenged with fresh gas during the valve overlap. This measure is particularly advantageous if a fuel pre-storage in the intake manifold is largely dispensed with in order not to scavenge any unburned fuel into the exhaust gas tract during the overlapping phase. Since the test engine was not modified at the valve train or the valve timing during the ALP supercharging, despite the stoichiometric operation with AFR≈14,7 scavenging and efficiency losses occured. There is still considerable potential for ALP supercharging, which can be exploited by reducing the timing of the valve overlap, respectively could be realized partially by the below mentioned ALP-FI-modification. The following diagrams show the savings of specific fuel consumption in both the full load of the factory engine and the ALP supercharged version. All measuring points of the ALP engine were tuned to AFR≈14,6 in order to enable the conversion of the emissions inside the catalytic converter.  It should be noted in particular that the exhaust gas temperatures of the ALP engine with AFR≈14,6 near by the cylinder head were lower than those of the naturally aspirated engine with AFR≈12,5 at at all mapping points. Remarkable is the very low exhaust gas temperature inside the ALP-supercharger which doesn´t exceed even at full load 65°C! Due to the above mentioned scavenging losses of fuel during the valve overlap, the AFR≈14,7 in the exhaust gas tract, based on series control timing, means a real lean combustion inside the cylinder, which is associated with a loss of power. This effect is reflected at the different performance levels of the ALP version regarding the dynamic performance test shown above with AFR≈14,0 and subsequent the steady state performance tests with AFR≈14,7.

To avoid the scavenging losses of fuel during the valve overlap, there should be stored preferably pure air or at least lean mixture directly at the inlet valves before opening. Against that most of the naturally aspirated engines realize a pre-storage of fuel directly at the inlet valves for fuel vaporization and good mixture. When inlet valve open a fuel vapor cloud runs into the combustion chamber, but in the case of the higher pressure ALP-supercharging this amount of fuel is directly transported into the exhaust manifold as scavenging loss. A repositioning of the fuel injector can reduce this scavenging losses and proof the further potential of the ALP-supercharging. Therefore the fuel injector was aligned against the air flow to the throttle flap, by which the pre-injected fuel is consequently stored in the inlet manifold and not in close proximity to the inlet valves. The associated test results are mentioned subsequent as “ALP-FI” version.

Specific fuel consumption of the ALP-supercharged engine under full load

Without mechanical changes inside the engine, the following improvements were achieved: